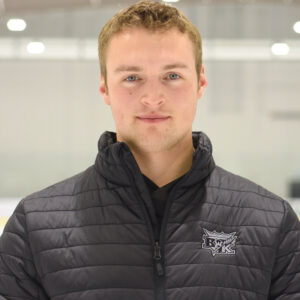 In 2012, Tyson was drafted 53rd overall by the Spokane Chiefs in the WHL Bantam Draft. Tyson’s first year of midget he played for the Southwest Cougars, before playing for the Neepawa Natives of the MJHL. In 2014, Tyson moved to Spokane to play for the Chiefs and went on to play 2 full seasons with the Chiefs before being traded to the Red Deer Rebels.

Unfortunately, his hockey career was cut short due to suffering four concussions, and at 19 years old he was forced to retire. Tyson transitioned quickly into a coaching role volunteering with the Bantam AAA Wheat Kings alongside Craig.

In 2017 Tyson moved to Lethbridge, Alberta to attend college. While living in Lethbridge, he was working with Lethbridge Minor Hockey and Hockey Alberta.

For the past 4 years, Tyson was the Regional Lead Goalie Instructor for the southern region of Alberta.