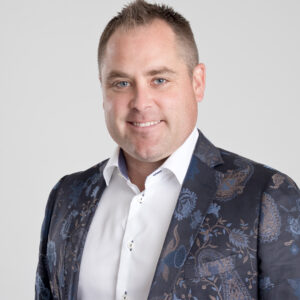 Born and raised in Brandon, Manitoba, Jared has always had a passion for Hockey and Golf. He is a product of the Brandon Minor Hockey System and went on to become one of the all-time leading goal scorers of the U18 Wheat King Program. Jacobson would move on to play with the Neepawa Natives, Waywayseecappo Wolverines and the Swan Valley Stampeders in the Manitoba Junior Hockey League during the 1997-2000 seasons. Off the ice, Jared is an accomplished golfer, winning championships in the prestigious Tamarack Golf Tournament at Clear Lake Golf Course in 2001, 2006, 2010 and 2011.

Jared has been actively involved in the Jacobson & Greiner third generation family business from an early age. After completing his secondary education at Brandon University, Bachelor of Business Administration in 2003, he returned to his roots and continued working for the family business. Always looking to improve his industry knowledge, Jared completed his MREA and became a licensed Realtor. In 2004, Jared took over the operations of Jacobson & Greiner, which at the time included J&G Homes and Rona, under the mentorship of his dad, Jack Jacobson.

Jared and his wife Robin have two children, daughter Halle and son Jaxon. Jared enjoys watching Halle compete as an English Rider and Jaxon chase his dreams of becoming a Hockey player.

In 2017 Jared was named the Brandon Chamber of Commerce Business Person of the Year. In addition to his business achievements, Jared has volunteered time to several organizations, most notably the Construction Association of Rural Manitoba, Brandon University, Manitoba Home Builders Association, Tamarack Golf Tournament and Hockey Brandon. Jared is a very genuine and giving individual who has a soft spot for kids and families in need. He recently built the Jacobson Family Park and made the largest donation in the history of Westman Dreams for Kids to create the regions first accessibility park.

Today, through Jared’s leadership, determination and vision, the organization has grown to include 33 companies, including the most recent acquisition of the Brandon Wheat Kings (Western Hockey League) that he acquired in September of 2020. He is hands on within the Group of Companies and values the relationships he builds with his customers.